A big congratulations to Verrado Cheer Coach Ashley Gronewold on being named Fury Spotlight Athlete of the Month for November. Ashley has been part of the Fury family since 2014 when she first brought her cheer team in for additional training. However, she didn’t join as a member until this past January. It’s always easy for a coach to tell their athletes what to do or what they want to see. It’s a whole new level of commitment and enthusiasm when you do what you say. Ashley has taken the harder path and shows up daily to work on self-improvement . Little did she realize that by setting goals for herself she was also making an impact on the young athletes part of her team. Now, the team sees their coach not giving up and always working hard to become stronger. Below are the questions we ask our Spotlight Athletes with her responses. 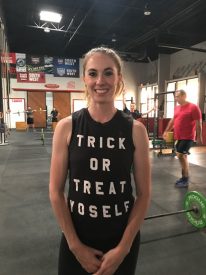 “I never thought I would fall in love with fitness the way I did.”

What brought you to CrossFit?
I am the head coach of the cheer program at Verrado High School and in 2014, I began bringing my athletes to Fury to train. I continued to make excuses as to why I couldn’t do CrossFit…none of which were logical of course. A little over a year after having my daughter I realized that I wasn’t as young and in shape as I used to be and that weight was not going away the way I thought it would, so it was time to make a change. I had a few friends that joined CrossFit over the years and I began to see their results. I wanted to be fit and healthy and have my energy back, so I made the decision to join Fury in January. I never thought I would fall in love with fitness the way that I did! I started with just 3 days a week, and that quickly grew to 4-5 after joining prep, and I was then setting goals for myself that I was so motivated to achieve. I wanted to move over to the CrossFit side within 6 months…and after 4 months at Fury, I achieved that goal! I now go 5-6 days a week because it’s enjoyable and I look forward to the workouts…something I never thought I would find myself saying.

What has impacted you the most at Fury?
The competitive, but friendly, environment and the coaching staff I’ve been able to work with. I’m extremely competitive and the main person I compete with is myself. I strive to be better at a skill than I previously was. I find other athletes in the gym that I look up to and push myself to beat their time or reps. I’ve been fortunate to have coaches that I look up to and that push me to be better each and every day. I appreciate the help I receive outside of class from both coaches and other athletes. I receive advice or tips and sometimes they even stay to do some extra work with me. The friendships I’ve made at the gym are truly wonderful and I love that everyone motivates and pushes me…even on the toughest days! Another huge impact for me is that I am able to not only workout alongside the athletes that I coach, but compete with them! My varsity girls are there every Thursday with Peter while I’m in the Endurance class and they see me pushing myself even when it’s not easy and not giving up. They encourage me through my workouts and I see them push themselves that much harder simply because they saw me doing the same thing. It also creates a fun, competitive environment between us…I always like getting the questions “What was your time coach?” or “How much did you lift coach?” 🙂

Hold yourself accountable and show up even when you don’t want to….you’ll never regret it. CrossFit truly is a lifestyle change and it’s the one of the best ones I’ve made.