Fury would like to recognize Esther as our August Spotlight Athlete of the Month. Esther came to Fury over four years ago looking to improve her overall health and fitness. Many of us have heard the excuse “I have young kids and no time.” However, Esther is the prime example of making time for what is important to you. Her drive to continually work hard and set personal goals has made her successful in progressing from our Basics program to CrossFit and continuing to make gains. You would most likely see Esther attend our 8am CrossFit class but when schedules get in the way she makes her appearance where it works for the day.

In the last few months Esther has started attending our Endurance class on the Thursdays she isn’t doing Yoga. If you are pulling in for the 9am class you can often see Esther and another avid runner of the gym running to the freeway. A year ago and even maybe six months ago you wouldn’t have caught Esther feeling like doing more “work” after a WOD. Esther not only is an athlete at Fury but also does an exceptional job as one of our designers. Her talent as an artist really is amazing. Peter could not be more thankful for her organization and keeping deadlines. I guess when you have a family of six you have to be somewhat on point with schedules. Below are Esther’s answers to our Spotlight questions.

What brought you to CrossFit?
Almost 6 years ago I was diagnosed with bladder cancer following the birth of my youngest child. Having also been diagnosed with gestational diabetes during my 3rd pregnancy, my health and fitness suddenly became a much higher priority. 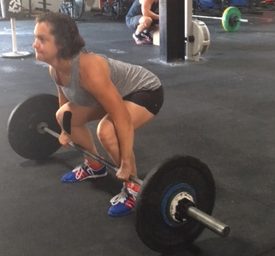 “Pushing myself when I want to quit, struggling through injuries, accomplishing goals has taught me more about myself than probably any individual thing in my life.”

Having 4 little kids at home, I felt like I didn’t have enough time to go to a gym but I knew that mentality had to change. I needed to find the right fit because working out to Beachbody videos and running on the weekends was only taking me so far. I’m not a natural athlete and wasn’t involved in sports growing up so the thought of CrossFit was super intimidating. My friends Josh and Melissa Hahne had been attending CrossFit Fury for a while and were very persuasive that I should give it a try. So, one Saturday, I gave it a go and the rest is history.

What has impacted you the most during your time at Fury?
The people – Particularly if you find yourself there at the same time each day, there’s like an unspoken accountability to be there. You don’t want to let your friends down, to, you know, suffer on their own. Really, we kind of minister to each other. It’s like a second church. We push each other to work harder, we encourage each other when we’re struggling and we’re excited when we see someone accomplish or excel in a lift or workout. And then there’s always that one who asks “Hey, you wanna run?” after every class. Even the running classes. *sigh*

The coaches – When it comes to working out, I personally need someone to tell me what to do. When I started Basics, Kelly and Brandi were all about telling me what to do, and they had no problem pointing out when I was doing it wrong. Those two amazing ladies truly desire to see people get stronger and healthier. They worked with me tirelessly on kipping pull ups, and handstands – which both took me an inordinate amount of time to figure out. On the CrossFit side I’ve been blessed with so many amazing coaches, currently with Cole who’s super insightful, very encouraging and won’t take any of my crap (ie whining). Tracy’s determination and positive attitude are especially welcome during Endurance and Lacey’s Vinyasa Yoga on Thursdays is amazing! I feel like I’ve developed better balance and coordination in a pretty short period of time. Then Peter – is there a single person more passionate about helping the community?

Myself – Sure, myself. Yourself.
Seriously. Pushing myself when I want to quit, struggling through injuries, accomplishing goals has taught me more about myself than probably any individual thing in my life. CrossFit is both the single most scary, exhilarating and yet humbling thing I regularly do in my life. It took me a solid year to stop feeling like I was going to nervous throw-up every time I drove into the parking lot. 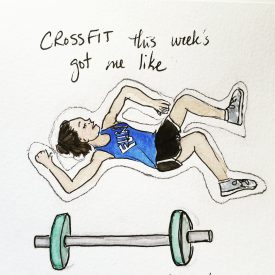 Any other comments you want to share with current or potential members?
There are a lot of mental and physical ups and downs in CrossFit. When you start you are accomplishing so much, getting stronger so fast and then eventually it slows down and you feel a little discouraged from your overall lack of progress (4 years! Curse you double-unders!). Don’t get trapped into the lies of comparisons or give up when you’re in a slump. You are not alone! Set a personal goal and work towards it: double-unders, rope climbs, kipping pull ups. We all have something we can improve. Be your own competition.

Congratulations Esther! Keep goal setting and pushing yourself that extra step out of your comfort zone.