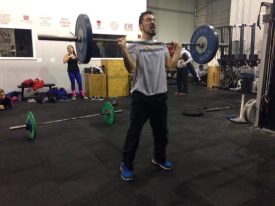 “I joined Fury to compete at life!”

Fury would like to recognize 37 year old Remigio Gordillo as our July Spotlight Athlete of the Month! Remigio has been a member with us since June 2011 and attends the 5am class that we often refer to as the Warriors. We all know how much dedication it takes to showing up every day, now just imagine having to set your alarm before the sun is even up and most are still going to be sleeping for another hour or two. In February of 2011 Remigio lost his brother at the age of 32 to a massive heart attack. This tragic event sparked a fire within Remigio and he made a commitment to doing everything possible to prevent death or any illness from taking his life too soon.

Over the past five years Remigio has seen vast improvement in his overall health because he shows up consistently. Recently he was able to qualify for an increase in life insurance after an intense process that included medical testing. Remigio attributes this to CrossFit and the work he has put in to get in the best shape possible.

Remigio was in our Basics program for quite some time before making the decision to try the Paleo diet. With this change his conditioning was taken to a new level and he was able to push harder longer. He made the move to CrossFit a year and a half ago and has seen even more improvement in his fitness. Remigio says the camaraderie at class pushes him to show up and work hard. We asked him some questions regarding his time at Fury and below are his responses:

“The most impactful thing for me has been the brotherhood and camaraderie that exists. …I go to the box every morning because I know my comrades will be there.”

What brought you to CrossFit?

In February 2011 my brother, who is 14 months older than me, died of a massive heart attack in his sleep at the age of 32 – 3 months before his wedding. I had a 9-month-old daughter, a wife and was ridiculously out of shape. Before my daughter was born I was very active and loved working out. His death took a huge toll on me personally and also made me fear that the same could happen to me. If it did I didn’t want it to be because of any neglect on my part. I made a commitment that I was going to do everything I can to prevent death or any illnesses keeping me from being with my family. In May of that year my cousin, who CrossFits in Houston, was visiting and wanted to drop in at Fury. I went with her to the Saturday free class, told them I would be back in June when school was out, went home and threw up. As promised I signed up in June.

What has impacted you the most during your time at Fury?

The most impactful thing for me has been the brotherhood and camaraderie that exists. I’ve built several relationships especially with my 5 am warriors! I go to the box every morning because I know my comrades will be there. Pre-CrossFit I tried just about every type of workout or fitness program out there but there is nothing like CrossFit. The programming is awesome and the environment makes you give more than you knew you had.

I don’t know that I will ever compete in competitions or anything like that. However, I joined Fury to compete at life! I refuse to let any of the health pitfalls of life beat me and CrossFit Fury is my weapon for that battle. I recently applied for increased life insurance to protect my family. It was a pretty thorough and intense process including medical testing, etc. I was approved with the highest rating you can have – Preferred Plus! I believe that is attributed to everything I have gained at CrossFit Fury.

I was in Basics for a long time and didn’t want to move to CrossFit. However, when I went full Paleo my conditioning went to another level and it was time for me to move up. I have been at the CrossFit level for over a year and half. If you make the mental commitment your body will follow. The mental workout is way harder than any WOD. I have come in to do WOD’s on 2 hours of sleep before because any disruption of your routine is the beginning of a new one. Just get up and show up!

Congratulations Remigio on all of your hard work and dedication on making your health and fitness top priority!