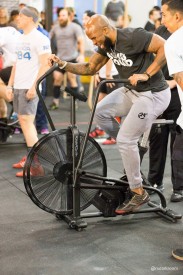 Today we registered the team for the South Regional but we did have to make a slight change to the line up.  Unfortunately, Morgan was unable to get the time off for the weekend so we have moved Peter into Morgan’s spot and added James Nwobu as the alternate. On short notice, James is able to step in and help get the team ready for Regionals in 21 days.

James, a native of Houston, Texas moved to the Phoenix area over a year ago and joined Fury 9 months ago.  James dabbled in CrossFit  but never got serious about it until he joined Fury last summer.  James competed on the Bomb Squad that represent Fury at the AZ Team Invitational in January and will be a great addition to the team.  James graduated Texas, A & M with an exercise science degree and currently helps Fury’s Breathe Later Productions with product and apparel design.