After the 2014 Open, Boyce said his goal was to make the 2015 Regional Qualifier for his age division.

When 55 year-old Al Boyce started CrossFit in 2013, he had one simple goal – to improve his golf swing. He had been exercising at the local YMCA for several years hitting the cardio machines and doing what he could to stay fit, but boredom set in with his mundane routine and he knew it was time for a change.

“My golf game had been suffering and I noticed that I was becoming more non-muscle than muscle. I told Pete [Egyed] that my main objective was to build core strength for a powerful golf swing, [Pete] said ‘I think we can help you with that,’” said Boyce.

Al started in Fury’s Basics program in March of 2013 and did his initial assessment with Coach Kelly McGuire. He quickly found that although he’d been active and doing things to stay fit, he wasn’t in as good of shape as he thought he was.

“I was twenty pounds heavier and the six-minute assessment almost killed me! But I knew deep down that the CrossFit style workouts were exactly what I needed,” said Boyce.

In his first year, Boyce focused on learning the fundamental movements of Crossfit and trying to figure out the programming. With high intensity varied workouts, survival – not competition – was at the top of his list. Then came last year’s Open.

“It was very humbling and almost embarrassing to a degree, there was a very large disparity between where I thought I was physically and where the scores showed in actuality,” recalls Boyce.

Boyce realized that he needed a lot of work in every skill and movement across the board and he needed more strength. In addition, his recovery time was lengthy and he felt sore after almost every single workout, every single day. After 14.5 it took him nearly a week to recover.

“It was an absolute crushing workout both physically and mentally. My goal was seventeen minutes and I finished in something like twenty-four minutes,” Boyce recalls of the burpee/thruster workout.

Armed with knowledge, experience and a new intensity, Boyce took his training to the next level. He began going to class five days a week in the morning, a couple of open gym times in the 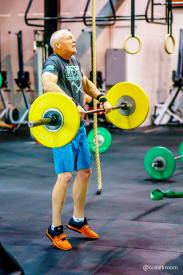 afternoon and got involved with the “Barbell Club” that focused on strength and Olympic lifting two nights a week. Putting in extra time at the gym paid off and he began seeing improvement. So, he set a new goal.

“I found I had to have some type of goal to keep focused. My goal for this year was to make it to the Regional workouts,” said Boyce.

And that’s exactly what he did. With a 59th place finish worldwide for the 50-54 age division, Boyce has accomplished his goal. Although he did all of the Open workouts at CrossFit Fury, he will represent CrossFit Yelm and the North West Region based on the location of his primary residence.

“My Open experience was better this year than last year. I know enough now about CrossFit, myself, strengths, weaknesses, WOD’s, training and nutrition to make sense of the whole thing and come up with a legitimate plan,” Boyce said.

Al will have four days to complete four workouts starting Thursday, April 23rd.  The twenty athletes with the fewest points at the end of the Qualifier will receive an invitation to compete in the CrossFit Games in Carson, CA.

Boyce’s wife and daughter are supportive of his CrossFit journey. Both of them joined CrossFit about a year ago and have since come to understand the community and benefits of the CrossFit lifestyle regardless of where they train (they also split time between Fury and Yelm).

“Fury is a special place. The coaching, the people, the programs, equipment, atmosphere is all top shelf. What I enjoy most about the [CrossFit] experience is the people, excitement and feeling of community. I feel younger and more alive,” Boyce added.

As for that powerful golf swing, he got that too.