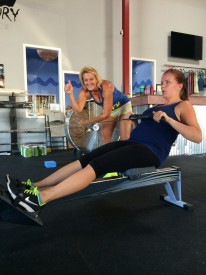 Bridget Palmer is pregnant with her 4th child but first while doing CrossFit.

It’s a conversation that has sparked interest and controversy over that past several years. Research has been done and articles have been written over the question: Should pregnant women do CrossFit? At CrossFit Fury, there are several women who have continued with their CrossFit efforts moving through their pregnancies active, healthy and safe. Each has a different story but one thing in common is their collaboration with coaches and doctors to make the best decisions for their experience as possible. Here are two of their stories.

Lauren Driessen started at CrossFit Fury last August. With a busy three year-old and a stressful work schedule, she was eager to get back in shape and find a place to relieve some stress. She found the combination of exercise and a daily routine provided just that. “I feel better when I am in a routine. I am a high stress person by nature and this really reduces stress in my life. It’s enough to help balance me out” says Driessen.

Stress reduction wasn’t the only benefit Driessen got from CrossFit, the fitter she became the more she learned about the CrossFit lifestyle. She soon adopted healthier eating habits and embraced the support and encouragement of the Fury community as well – she was experiencing a physical transformation, one she had seen her cousin go through months before she stepped through the doors at Fury.

Having struggled with infertility, Driessen was surprised to find out that she was already four months along in February of this year. Not wanting to lose the momentum she had gained from being active, she continued what she had been doing for more than a year and, in fact, had the blessing of her doctor to do just that. 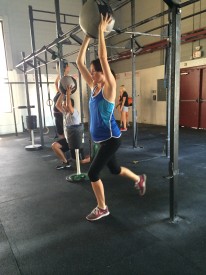 Lauren Driessen is having her second baby and feels CrossFit has helped her throughout her pregnancy.

“He told me not to start anything new, but that I could continue with the same workout pattern. I am careful with what I do. It’s not about going all out anymore, some days it’s just about showing up,” said Driessen.

Her Basic’s coaches, Kelly McGuire and Brandi Kalafat have also been instrumental in getting Lauren to the gym on those days when it’s that last thing she wants to do. All of Laurens workouts can be scaled and modified, meaning that any movements can be substituted and any weight can be changed to suit her needs.

“I tell them not to miss a class. Get them to the gym, I will find something for them to do. I know this one hour is important for them. Gives them a chance to get away, helps with anxiety and plugs them into a community,” says Coach Kelly McGuire.

Driessen added, “the support and help [with modifications] I get from the coaches is awesome. The team aspect from the people in my class has been really sweet.”

Jenn Boswell wasn’t about to part with CrossFit when she became pregnant. An avid runner and committed CrossFitter Jenn figured “if it’s not broke, don’t fix it.” In fact, Boswell has maintained the same philosophy about CrossFit since before she was pregnant and will carry it into post-partum as well.

“Just like any lift or day that you walk into CrossFit, I gauge how I am feeling and what I know I am capable of doing. Some days I feel great doing pull-ups, other days it’s just not in the cards. We (CrossFit athletes) are supposed to be smart about the weights we put on the bar and the necessary scaled movements for us to do the WOD” says Boswell.

Jen Boswell is having her first baby and says she listens to her body and only pushes herself as hard as her body tells her it is ok.

An athlete who knows her body and her limits (she did the Open while pregnant), Boswell, who is now 35 weeks along in her pregnancy, makes substitutions and modifications depending on the day – although there were some bigger changes she made around 18 weeks and 20 weeks.

At 18 weeks, anything upside down such as HSPU’s was off limits and substituted with strict press or dumb bell press. At 20 weeks, she swapped out snatches entirely subbing kettlebell snatches instead.

“I know I’m not out to make a record pace or be the Fittest Pregnant Woman on Earth. I’m happy to work out, see my friends and make good choices for my health. If I’m too hot or too winded or just not able, I stop, rest and pick up a lower intensity weight/exercise” says Boswell.

Her doctor is also supportive of her continuation with CrossFit. “His attitude was keep doing what you are doing and listen to your body. It’s very obvious when something is too much and when I need to back off” says Boswell.

Doctor’s and The Conversation

Pregnant women are going to do CrossFit. The best strategy is to collaborate with your coaches and your doctor and make informed decisions.

Dr. Jordan R. Oland, MD of Estrella Women’s Health Center in Phoenix, AZ agrees, “This is a very interesting topic and an unfortunate area of controversy. In regards to CrossFit, it is beneficial to work with a physician as well as a trainer/instructor who is familiar with the program and can advise what adjustments need to be made depending on the patient’s condition.”

As with any physical exertion during pregnancy, there are some medical conditions which would make high impact exercises dangerous. But for most women, Dr. Oland suggests that CrossFit exercises are safe in pregnancy.

“As far as specific warnings, I advise my patients to pay close attention and listen to their bodies regarding limits and discomfort. It’s okay to stop an exercise or activity if they don’t feel okay. I also encourage them to focus on maintaining hydration as pregnant women become dehydrated more easily. During the later stages of pregnancy patients often develop a fair amount of joint laxity and may have difficulty with certain movements, some CrossFit exercises may need to be modified over the course of the pregnancy” says Dr. Oland. He adds “The common public perception is that pregnancy is a time of rest and ‘eating for two.’ Popular images show pregnant women sitting or resting. As a result, an image of a pregnant woman doing squats, running lifting weights or doing a burpee is considered jarring. Thankfully public perception of exercise in pregnancy is changing.”