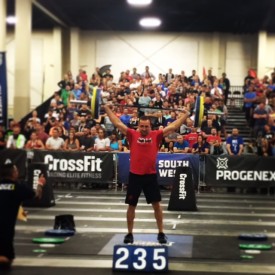 Peter set a PR on his hang squat snatch hitting this 235 pound attempt.

The weekend spent in Utah at the Southwest Regionals was a bit of a roller coaster. As happens so often, the ebb and flow of Fury’s performances was similar for both the team and Peter. The weekend started off a bit rough with the team and peter accumulating a lot of points on some events that didn’t go well. The rest of the events were an attempt to climb out of that hole and onto the podium. While both Peter and the team put up some great times on the later workouts, it just wasn’t enough to overcome the earlier challenges. 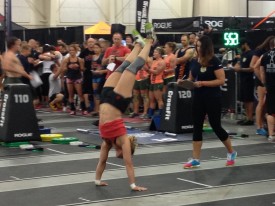 Aimee just misses the full 120 feet, falling one hand shy of 115 feet. The team finished with 400 total feet walked on their hands.

CrossFit competitions reward the generalist, and this year’s programming tested competitor’s skills in a variety of gymnastic elements. The team did well with a 2nd place finish on the hang squat snatch total, but the workouts that focused on muscle ups and handstand walking resulted in much lower placings. Peter did well with a PR on the hang snatch and the handstand walk, but he struggled with 150 pistols and fell behind. Day one was a struggle for everyone. Day 2 turned out well for the team with a 3rd place finish for the women and men in the thruster/rope climb workout that showcased our strategy and teamwork. The strict handstand pushup workout, however, revealed some individual weaknesses on the team. While it wasn’t a bad finish, it was more points than we had hoped for. Peter started Saturday with his own strict handstand pushup workout; this is not a strength for Peter either, which caused him to fall a little further on the leaderboard. His performance on the legless rope climb workout, however, served as a turning point for his weekend. His 7th place finish was the beginning of his rise in the standings. 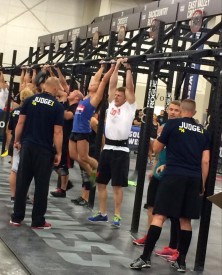 Josh and Liz chip through the 50 toes to bar during the first workout on Sunday. The team finished 4th overall, missing the podium by 1 spot.

As the team prepared for a push to the podium on day 3 we encountered some additional obstacles. Many of the staff, volunteers and competitors were struck with a viral stomach flu. Fury did not escape its affects with Will coming down with symptoms early Sunday morning. Kyle suffered a pulled calf muscle in the hang squat snatch that continued to plague him on Sunday. Both Will and Kyle stepped up and continued to fight despite these obstacles and showed impressive toughness and determination. The team ended day 3 with a 7th place and  a 5th place finish on the final 2 workouts. Despite their comeback, they were ultimately left out of a podium spot and a trip the the Games in Carson; the team finished in 4th overall. On the individual side, Peter was finally in his wheel house and made Sunday his day to shine.  Peter started the day with a 3rd place finish in the 50s workout and an even better 2nd place finish in the pull up/overhead squat wod. After being as low as 31st on Saturday, Peter’s grit and determination propelled him up the leaderboard to a 12th place overall finish. 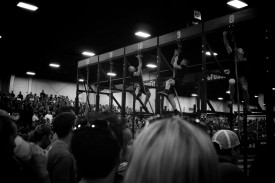 Peter started his climb back up the leaderboard with this amazing legless rope climb and sprint WOD. He finished 7th in the event with a time of 4:05.

Everyone had higher hopes for our results as we headed into the weekend, but the reality is that competitions do not always go as expected.  We fought through barriers, stuck together and leaned on the support crew around us.  In the end, while we are disappointed with the outcome, we know that we left everything on the competition floor.  Weakness were exposed, but once identified they can be addressed.  We will all be stronger athletes for next year.

CrossFit embodies a lot of valuable principles in life.  One of those is the idea of pushing your limits and taking on challenges.  Sometimes, when you put yourself out there and open yourself up to failing, success isn’t the outcome.  But if your aren’t willing to risk failure, you won’t achieve anything worth having.