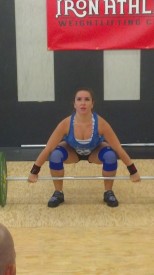 Kelsi Rentfro competing in her first Olympic Lifting competition back in May.

You might recognize her from working in the daycare or as the youngest daughter of 6:30pm regulars Bob and Tyleen Rentfro but either way you can’t miss the astonishing transformation of this month’s Spotlight athlete, Kelsi Rentfro!

Kelsi joined CrossFit Fury reluctantly two years ago but has since “drank the juice” as they say and has not only dropped an amazing 28 pounds but her whole attitude towards working out and looking good has a new meaning.  Kelsi was a dancer her whole life but once school and dance ended, she traveled and like many of us put on some weight.  After seeing how CrossFit had helped her Dad, Kelsi decided to give it a try and despite hating it at first, she was determined to stick with it.  Now, two years later Kelsi looks and feels like a new person.  Check out Kelsi’s CrossFit story. 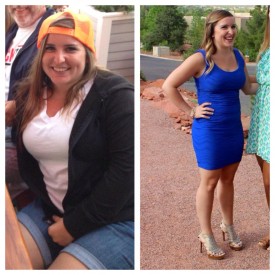 Kelsi dropped 25 pounds in the last 8 months but even more important is the amount of confidence she has gained in herself. We are very proud of Kelsi and all her hard work!

What kept you coming back/motivated?  After my first class I thought to myself, I never want to do this again. I had tried a class in the Winter of 2011 and was thankful I had to go back to school because I hated CrossFit (because I was so sore). Growing up as a dancer everything was pretty easy and natural but I am not athletic in anyway. Anyway, I sucked it up and came back the next day. Then I had my assessment with Aimee, after that I realized that this whole “CrossFit” thing wasn’t so bad after all. I also realized that I wasn’t going to be dancing anymore so I need an activity that kept me active so I don’t just go to school part time and sleep.

How long did it take you to go from Basics to CrossFit? I started Basics in June of 2012 and moved up to CrossFit October of 2012.

What is the best thing you have gotten out of doing CrossFit? I am unable to choose just one great thing I have gotten out of CrossFit. So a few things I have gotten are a new love for working out and lifting (mainly lifting), a new family, my first real job, and so many new friends.
What is the one thing you have done here that you never thought you could do? A few things I have never thought I’d ever do and have done are a pull-up (finally a strict one after two years), run a 5k (running in general), and the biggest one my first Olympic Lifting Competition.
What is one goal you have reached? And one goal you still hope to reach? A goal I have reached that I worked towards was an Olympic Lifting Competition. I didn’t get any award or anything but I had a blast doing it and hope to do another one in the future. A goal I would like to reach towards to next would have to be a CrossFit Competition, I have done CrossFit fundraisers but never a competition so I believe that would be a fun experience.

How has your diet changed since starting CrossFit?  My diet has changed a lot since starting CrossFit. I was a chicken finger and fries girl (I still am). But I loved bread and pasta and dairy. Once I moved home my parents were eating Paleo, I am a picky person when it comes to food but I started eating what they were eating. Eventually I realized I felt better throughout the day and became more aware of what I put into my body.

How has the Paleo diet affected your workouts/life?  The Paleo diet has helped my life a lot. Although, I don’t eat Paleo like the serious CrossFitters my body has made changes to what it can take and not take. I no longer eat dairy and I try not to eat too much breads. I have seen improvements in my workouts, my weights are going up and I have more stamina when completing a workout. Also, I have noticed I am not as tired all the time and lethargic.