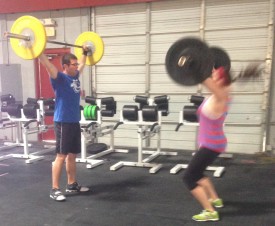 Josh and Danee wod together during Saturday partner wod. They never miss a chance to workout together.

May’s Spotlight couple of the month have become familiar faces around the gym-they are Josh and Danee Carlton.  Not only is Danee one of our daycare ladies, both she and her husband have become dedicated CrossFitters. These two rarely miss a day and are usually the first ones in the door on Thursdays to get some extra skill work in during Detention. They have both completely committed to changing their lifestyle and not only want to be fit and healthy for each other, but also for their 2 beautiful little girls Addison and Brennan.  Congrats to Josh and Danee for all their hard work and everything they bring to Fury on a daily basis!

Why Did you start CrossFit? Josh – It all began at Augies on August 11, 2011. I was there watching a UFC fight with Jeff Castro & Matt Lizotte and they wouldn’t stop talking about CrossFit. As they were talking about it, Matt mentioned that there were women at Fury that could lift more than me and I thought that was crazy! (Yes, I was wrong and there still are.) A month later I finally went to a Saturday class and was hooked.

Danee- I had always had a little interest in CrossFit having watched my hubby drop a lot of weight when he started. I had been doing Stroller Strides for 4 years and it was working for my lifestyle at the time. However, once my 5 year old was going to school and my 2 year old would not sit in the stroller anymore it was time to find something new. I came to a basics class with Erica Lizotte and realized that this was what I needed to be doing. 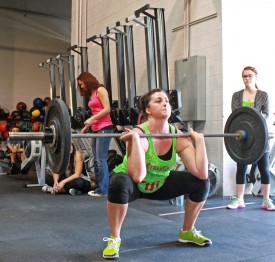 Danee started CrossFit in September 2011 and her first workout was 7 minutes of Burpees!

What kept you coming back/motivated? Josh – In the beginning it was the weight loss. I was somewhere above 250lbs, and once I started the weight was falling off. Now, it’s the feeling of accomplishment. Everyday I’m doing something new that I never thought I could do. Another key factor is that you’re never in it alone. No matter if you finish last, you’re still doing the same workout as the other members and you’re going through the same amount of pain together. It’s nice to have that connection in a group environment instead of doing it all by yourself.

Danee- Once getting over the first few weeks of body/mind shock, I was starting to see a change in my stamina and overall ability to complete the WODs. I had seen firsthand with my hubby and friends just how effective CrossFit was, so I was determined to prove to myself what I could have the same results.

Josh was introduced to CrossFit by fellow members Matt Lizotte and Jeff Castro. Josh initially started CrossFit to loose weight but now loves the sense of accomplishment too!

How long did it take you to go from Basics to CrossFit Prep? Josh – It took me a month or so. I thought there was a formal invite for Prep. Like, once you were RXing workouts, the coaches would tell you it’s time to make the next step. But once I realized it was open to everyone, I was in.

Danee- It was a few months. Finally, Kelly started pointing at everyone who should stay for prep. And we all know that when Kelly tells you to do something, you do it. Thank you Kelly.

What is the best thing you have gotten out of doing CrossFit? Josh- A new outlook on life. When you surround yourself with healthy and positive individuals on a daily basis, it makes you strive to be better in everything you do.

Danee- A new and different approach at the way I workout as well as my lifestyle. And the truth is, it has brought my husband and I closer. Having this in common has been a good way to remind me of how supportive he is of me and how proud I am of him .

What is the one thing you have done here that you never thought you could do? Josh – Gymnastics. Never in a million years did I ever think I could do any of that.

What is one goal you have reached? And one goal you still hope to reach? Joshua – Muscle-ups. My next goal is to handstand walk the length of the gym.

How has your diet changed since starting CrossFit? We started basing every meal around the Paleo Lifestyle. Before CrossFit, every evening wasn’t about what’s for dinner but more about what’s for dessert. I think we were making ice cream and cookie runs every other night. We were both over indulging. Now we’re both more concerned with what type of food we’re putting into our bodies, so we can get the most out of them.

How has the paleo diet affected your workouts/life? Josh – I feel much better throughout the day when eating Paleo. I also have noticed that I sleep better at night, too. I have more energy for my girls and that is HUGE! It’s so much easier to keep up with them all day long. 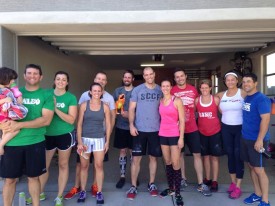 Josh and Danee have become part of the Fury family and love working out along side other couples including the Lizottes, McCallums and Olvers.

Danee – It was not until sticking to a better paleo based diet did I start seeing the real weight come off and see my body change. I could feel the difference in the WODs having eaten better. I feel better and I have more energy. Now, instead of eating store bought cupcakes, I’m making almond meal chocolate chip cookies. I’m more mindful about how what I eat affects me the next day, and even weeks from now.

We are very thankful and aware that without the support and kindness of some of the people at the gym and in our lives that the road to this healthy and better lifestyle would not be as good or successful. So, thank you so much to Matt & Erica Lizotte in addition to Peter, Aimee and the rest of the Fury Staff.