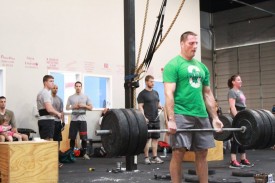 Saxon completes 14.3, a tough combination of increasing heavy deadlifts and box jumps. Saxon was 8th in gym with 145 total reps.

When the CrossFit Open closed on March 31st and the results were tallied, 200 Master’s athletes were left to vie for a few coveted spots at the CrossFit Games in Carson, CA this summer. One of those athletes is Fury member, Saxon Yandell, who finished the Open in 195th place worldwide and 24th place in the South West Region for the Men’s Master’s 40-44 Division.

Introduced to CrossFit in 2007 in the Air Force, Saxon quickly took to the practice. In 2008 when he was stationed in Iraq, he and his squadron became their own CrossFit community and acted as coaches for each other by watching CrossFit videos and correcting their lifts and movements based on what they saw. When he returned home, he continued to do WOD’s on base and in 2013 decided to give the Open a shot.

After performing workout 13.1 (a combination of power snatches and burpees) on base at Luke, He was urged by a friend to have his workout scored at an affiliate. He did and continued the remaining workouts at CrossFit Fury where he would be judged, scored and compared with other athletes in his division.

He completed workouts 13.2 – 13.5 at Fury and submitted his scores. Although his 13.1 workout had him in 9th place in the region for his division for week one, the release of workout 13.2 resulted in a drop on the leaderboard from 9th to 125th place. He ended the 2013 Open at 39th in the region and 254th worldwide. A great performance for his first year, and motivation for 2014! 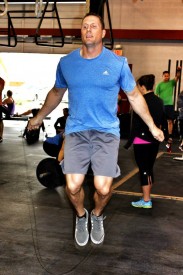 That same year as luck would have it, his mother-in-law won a subscription for a 3 month membership to CrossFit Fury in an auction and offered the training to Saxon.

“I did it for three months and got hooked. I got hooked because of the training” said Yandell who has worked with just about every coach at Fury due to the variation in his pilot schedule. Now his CrossFit workouts at Fury are the only workouts he does during the week. He attributes his success over the past year and the fact that he qualified to the training he has gotten at Fury.

The first of the five scores for the Master’s regional event will be Saxon’s final Open Ranking. For example, he finished in 195th place worldwide and will begin the Regional event with 195 points. Each subsequent event will be scored depending on the athlete’s finish on each event. If Saxon gets 10th on the first event, he will add 10 points to his current 195 points for a total of 205 points for the two events.

The top 20 athletes with the fewest points at the end of the Qualifier will be invited to compete at the Games in Carson, CA.

“I am not going to climb from 195th to the top 20. I am just doing it for fun and I can’t seem to say ‘no’ to the challenge despite the unsurmountable odds” says Yandell.

Saxon plans to attack the first workout Friday morning at 8am and then one a day there after until the final workout on Monday.  Come out and support Saxon as he represents Fury and takes on the Master’s qualifier.