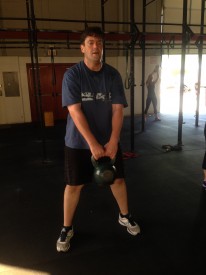 Jeff joined CrossFit in January 2013. He has truly transformed his life and his body!

Frayed ropes hang from the center of the gym, Jeff Bobby spots them. In an instant fear creeps in. “Oh geez” he says under his breath and thinks about how those same ropes have been taunting him since high school gym class. However, after two months of research and building up the courage to start, he is determined to begin his first CrossFit workout.

Overweight and not really an active person, Jeff spent the majority of his high school and college years chasing the next party – a lifestyle choice that ultimately landed him in a rehab center more than six years ago. It was the decision to get clean that put him on an entirely new path and lead him to walk through the doors of CrossFit Fury in January of this year. It was the decision to get clean that helped get him to where he is today – seventy five pounds lighter, cigarette free, drug and alcohol free, adopting a Paleo lifestyle and setting his sights to climb that rope. In fact, it’s not a matter of if he can climb the rope, it’s when. “After seeing progress week after week, month after month I just know I am going to be able to climb it, it’s just a matter of when” says Jeff, now more than eight months into his CrossFit journey.

“It was the hardest thing, but I liked it. I knew there was something different than the other gyms and that kept me interested.” Jeff Bobby on CrossFit Fury

Like many who have tried CrossFit for the first time, Jeff started at the free Saturday class at the beginning of this year. He had seen signs around Goodyear, had checked out the website and had even read up on other stories and transformations of past members from the Fury site. It took him two months to get up the courage to finally try a class and that courage paid off. From the very first workout, Coaches Kelly and Derek made him feel welcome and capable and the variety of the workouts kept him coming back. Having tried other big box gyms, their personal trainers and every fad diet on the market, Jeff says that being able to see and feel progress on a weekly basis is what keeps him motivated, consistent and on track. “The workouts are challenging, but I can modify the more difficult movements so that I can just keep going” says Jeff.

“I see CrossFit as an investment in myself. If you go to a five dollar a month gym, you will get five dollar results.” Jeff Bobby 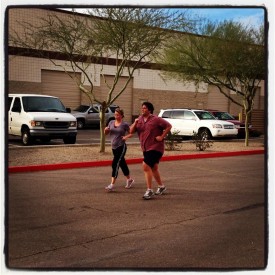 Jeff with his Basics partner Meredith Shannon back in February 2013.

As with most investments, it takes some time to start seeing a return and often it is not without a few setbacks. Several months after starting CrossFit in January this year, Jeff began to have knee problems. He knew he needed to continue his workouts, but he also needed to gain more strength to perform some of the movements that were putting stress on his knees. Jeff was determined and wanted to keep progressing, so instead of taking a break or throwing in the towel, he hunkered down and looked for a solution. The knee pain actually led him to begin personal training sessions with Will Trujillo (also a Physical Therapist). He and Will work together once a week on his form, technique, strength and physical therapy. “Will is really positive. He’s never made me feel like I am not capable because of my level. He customizes my workouts to where I am that day and at a level where I feel comfortable but he still pushes me” says Jeff.

CrossFit has been the answer for Jeff, but so has a sense of determination, a sense that he is investing into a future where he is healthy and fit and a sense that small goals lead to bigger goals and that most of the time, you just need to tackle one habit at a time. Jeff is an excellent example of that and you know what? That rope doesn’t stand a chance.