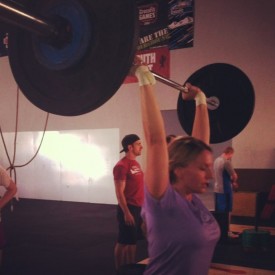 Melanie came to me about a year ago and asked me to help her with her lifts and pull ups because she really wanted to compete in our Furious 6 competition.  We are now a little over a month away and Melanie has worked hard and is ready!  I have seen her strength and most importantly her confidence triple over the last year.  A year ago Melanie would never have considered attempting the 19 Heroes WOD but she was the first to sign up and she not only did it but she had a great time, so much so that she signed herself up for The Wanting Series kicking off this Friday night at CrossFit Forbidden.  If you are free, join me in Scottsdale to cheer Melanie and a few other Furicians (Leonard Ornstein, Molly O’Hara, Jessie Collier and Carlos Orozco) on in their first ever CrossFit competition!

When did you Start CrossFit? I started CrossFit in May 2011. I actually started CrossFit in 2009 with Peter but stopped for awhile, stupid,  I know! .  We ran into peter early 2011 and thought why did we stop going?  So we rejoined gym and have been there ever since!

How long did it take you to go from Basics to CrossFit? I was in Basics for close to 6 months prior to starting Prep. Then moved into CrossFit in Jan 2013. 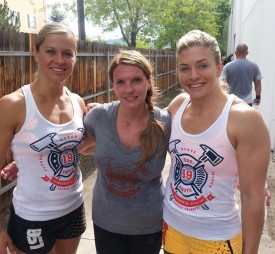 What kept you coming back/motivated? I have kept coming back because I want to keep challenging myself and get stronger and faster. At this point it is part of my daily routine.

What is one thing you have done here that you never thought you would do? I never thought I would ever sign up for a competition but yet I have signed up for over 3 this year alone!

What is one goal you have reached? And one goal you still hope to reach? The one thing that I set as a goal for myself when I started Prep was being able to do a handstand pushup and now I can! My biggest goal yet to reach is doing pull ups without a band!

Additional Comments: I really want to thank coach Aimee who has been working with me for close to year now with extra training. I wouldn’t be where I am at CrossFit without her help and coaching!!!